Diamond sparkles on the façade of Warsaw Klif Shopping Center 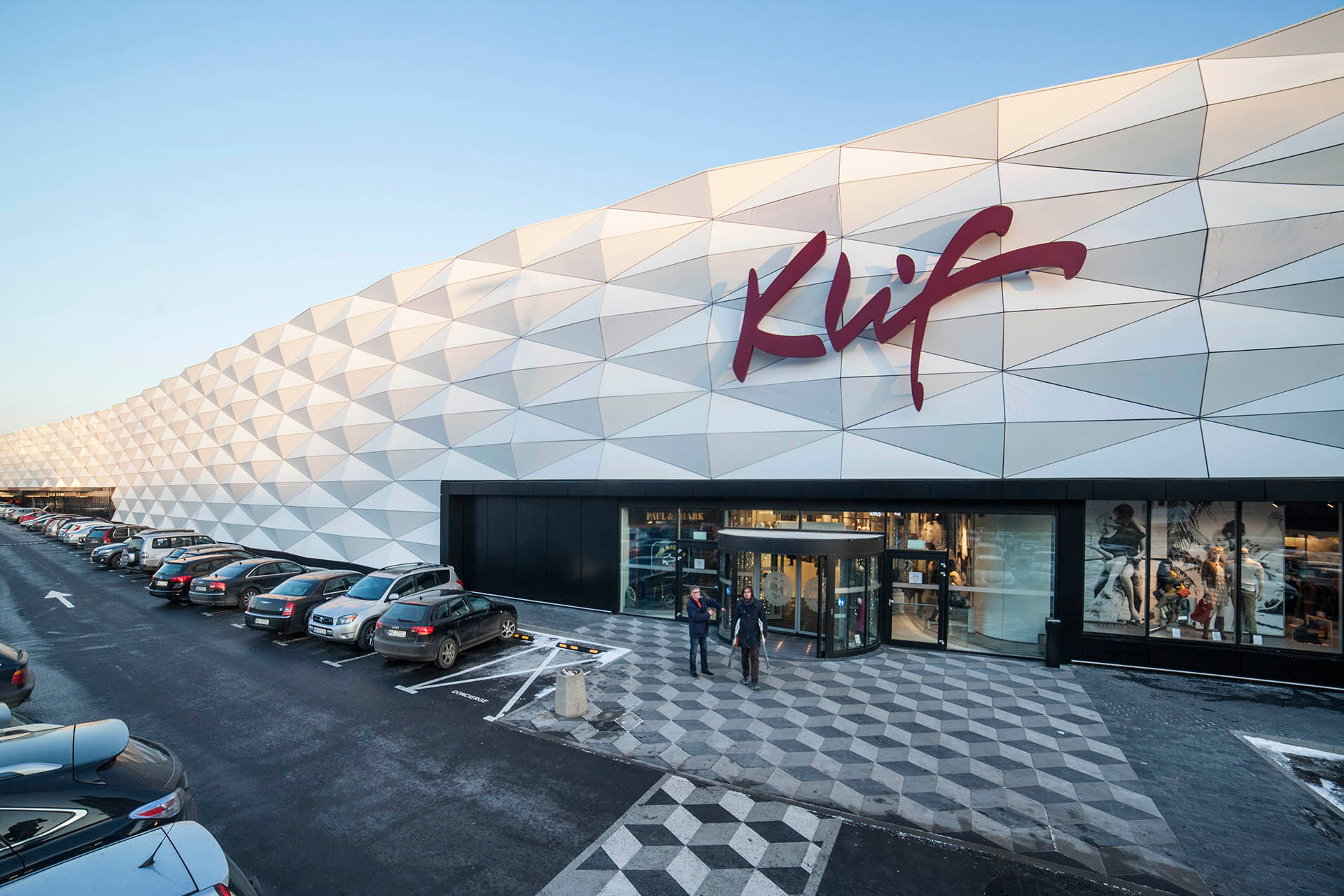 The Warsaw Dom Mody Klif shopping centre has gained an impressive and elegant setting, a new face and a new personality at the end of 2012. Architect bureau ‘Grupa 5 Architekci’ revolutionized the building conceiving a ventilated façade adopting DuPont™ Corian® high-tech surface to conceive – first in Poland – an advanced solution in architectural techniques.

The completed project of the facade – whose shape recalls diamonds  – was selected in a closed competition organised by the owner of the shopping centre – PAIGE Investments Sp. z o.o. Dom Mody Klif was opened in 1999 and is one of the first such facilities built in the capital of Poland. A similar shopping centre was opened in Gdynia a few years earlier in 1996.

The original Klif shopping centre building in Warsaw had been designed by architect Thomas Kozlowski who wanted to give it a look of the piano. It has changed its character over the years in parallel with the modifications of customers’ tastes. Recently the Klif Warsaw incorporated also cafes, travel agencies, restaurants, clothing stores and other commercial premises, a change that added an elegance to the overall environment.

After a few years of functioning the investors wanted to make the building more comfortable and friendly: changes were made outside and inside of the building to create fresh, modern and original spaces for visitors and lessees. Lighting and ceiling were redesigned, a resting area was built and a ventilation system revamped. Interiors were designed by Marek Tryzybowicz with a team of architects from Bose International Planing and Architecture. The most distinguished and visible change is the re-designed facade of the Klif, conceived by Grupa 5 Architekci.

Its aim was to create exclusivity and uniqueness to the building. The main architect Rafal Grzelewski comments “Our goal was to propose a new garment that would make Klif an icon of architecture. Material DuPont™ Corian® fulfilled idea of the project and hi aesthetic expectations. The fact that it is a first building with a facade made in surfacing material hi tech DuPont™ Corian® was another challenge.” About 1700 square meters of DuPont™ Corian® have been used for the facade of the building. 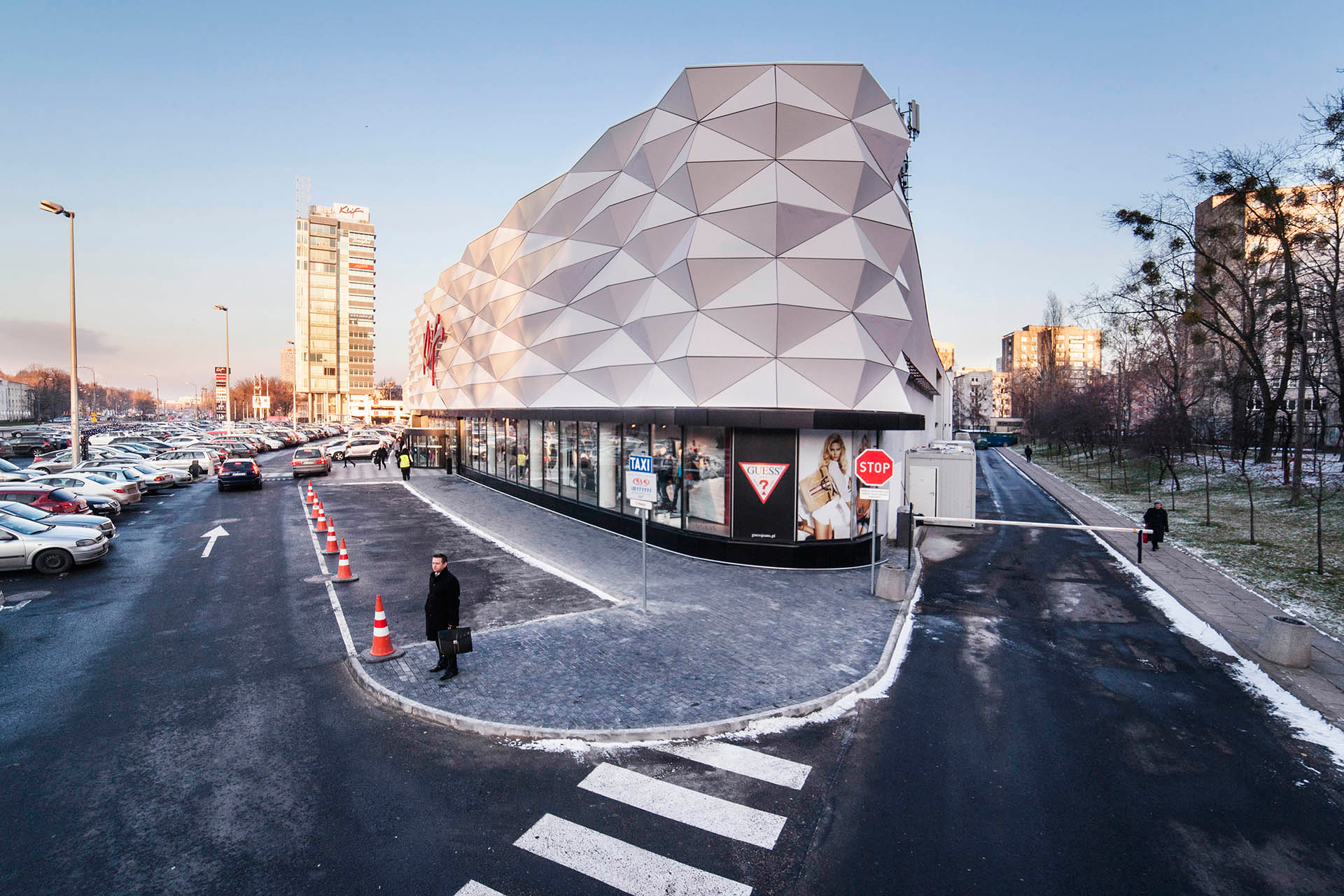 In 2012, DuPont™ Corian® achieved a positive result after an exhaustive testing program made by Building Research Institute (Instytut Techniki Budowlanej) and verified that the material meets all the Polish building requirements for exterior cladding materials and applications.

This modern surfacing material from DuPont™ also met all the specifications and requirements set for the Klif project. It was important that it is resistant to UV radiation and easy to renovate. Its non-porous surface also provides that, after many years of heavy use, the material still looks fresh and elegant.

“The building is opened to the Okopowa street so the length of the facade and building proportions were significant design guidelines. Arrangement and distribution of panels refers to the shape of diamonds which will be underlined by illuminated glass panels scattered throughout the facade. Entrances are highlighted by black lining. Facade is complemented by landscaping project: specially designed for this project paving, pergolas, strings pedestrians and small architecture” describes Rafal Grzelewski, Gropa 5 Architekci.

T.I.K.O. Systemy company was chosen to fabricate the façade. The company developed modular components that allow to assemble not only simple façade planes, but also complex three-dimensional structures. The challenge in this project was to measure precisely all inequalities on elevation of the walls and arches, which, after the elimination of breakdowns gave regular and spatial form. It was important also to take into account the thermal expansion of the surface of DuPont™ Corian® and the preservation of angles and distances between the panels. 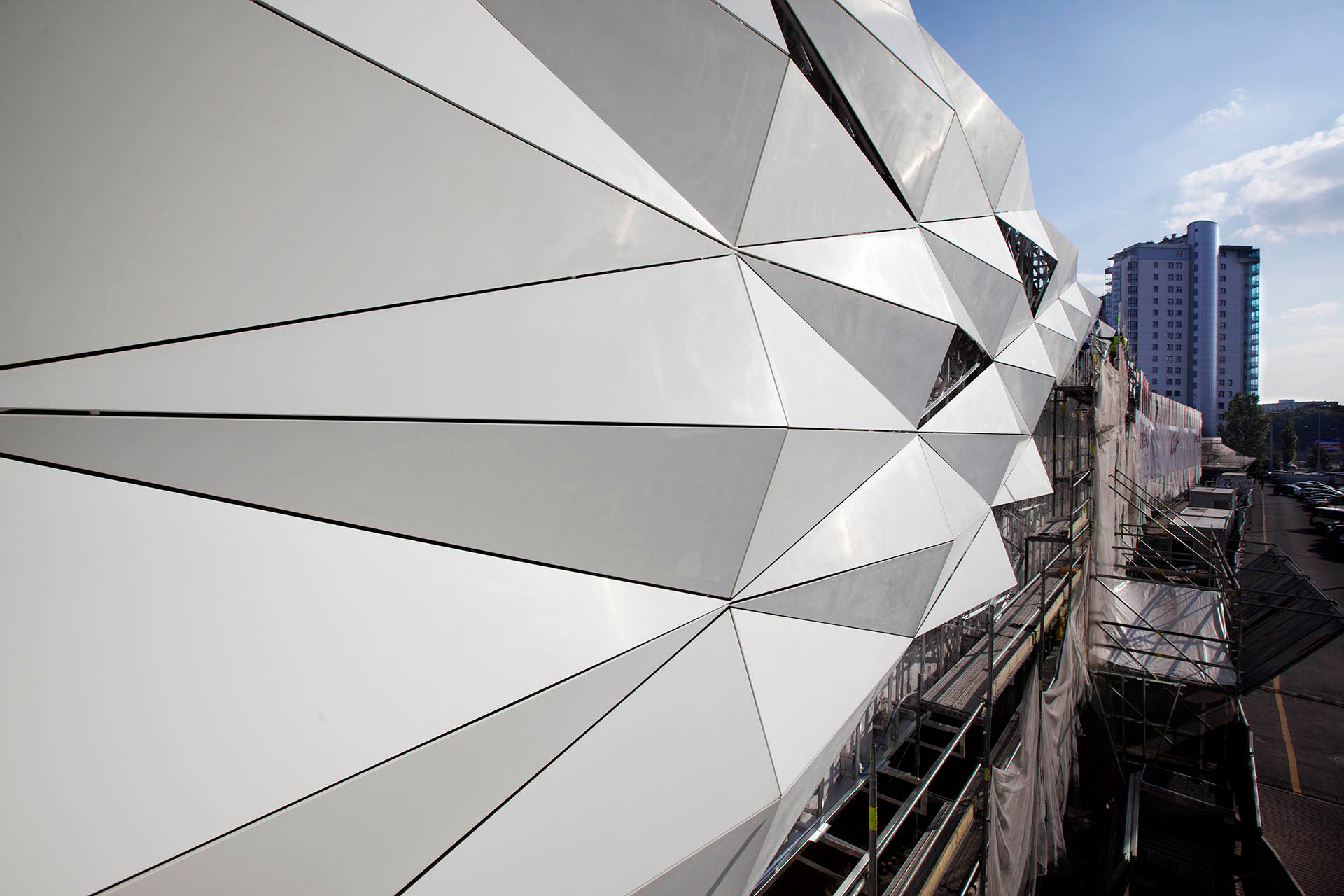 The key task was to make specially designed tables and mould cavities so it is easy to cut and get the panels ready to be installed on the façade.  Properly prepared mould cavities allowed to keep repeatability of linear and angular sizes for each format. Each two triangles were cut from the 1300 x 3658mm panel except the quoin where the sizes were different and accustomed to the angle of the building.

Rafał Grzelewski, Groupa 5 Architekci, says “We took under consideration exposition and different weather conditions and designed a ventilated facade. The spacing between the panels was used for this purpose.

Advanced surfacing material DuPont™ Corian® is smooth, so any kind of dirt is deposited less heavily on its surface than other materials. In addition, the cleaning is very simple and basic. Mounted at different angles, panels create beautiful shadows in both natural and artificial light.

Artur Ziółko, T.I.K.O. Systemy, says “A key task that we set ourselves was to design and build special tables for cutting and shaping DuPont™ Corian® panels. None of the triangles put on the facade had right angles. We made different moulds in order to maintain the repeatability of linear and angular dimensions. With the use of professional equipment for cutting, handling and dust extraction – further work was not a problem.”  He adds: “As an executive company that was making first in our country facade of DuPont™ Corian® we had to do a lot of internal studies, projects and tests in order to verify our decisions. Today we have knowledge and experience in this field and we know how to perform the external facades of DuPont™ Corian® to meet the needs of developers and investors.”

Design By: Rafal Grzelewski and team at Grupa 5 Architekci