Designed by David Stewart from Stewart Design, this home represents a first in Australian design where the exterior walls were clad in Corian® Solid Surface. 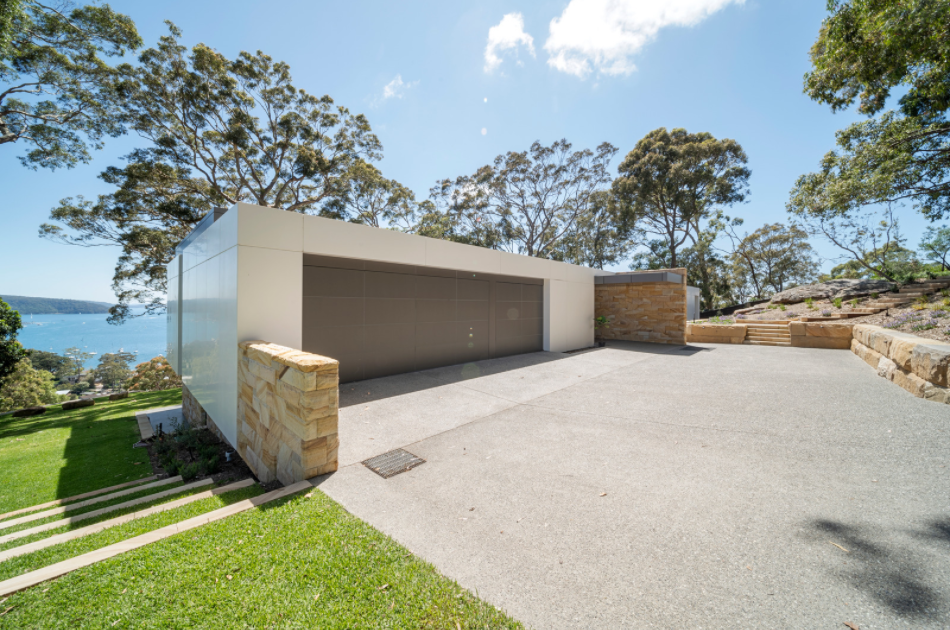 Perched on a waterfront sloping lot in Bayview — one of Sydney’s most sought-after locations —  the design called for something special. The homeowners had a vision to preserve the stunning view with double-glazed full-height sliding and fixed panels of glass on both levels facing due north. “It was the perfect site,” explains David Stewart, lead architect from Stewart Design, “it sits at the end of a cul-de-sac on the top of a cliff face in Bayview Heights with a large wedge-shaped block that provided expansive panoramic views.” 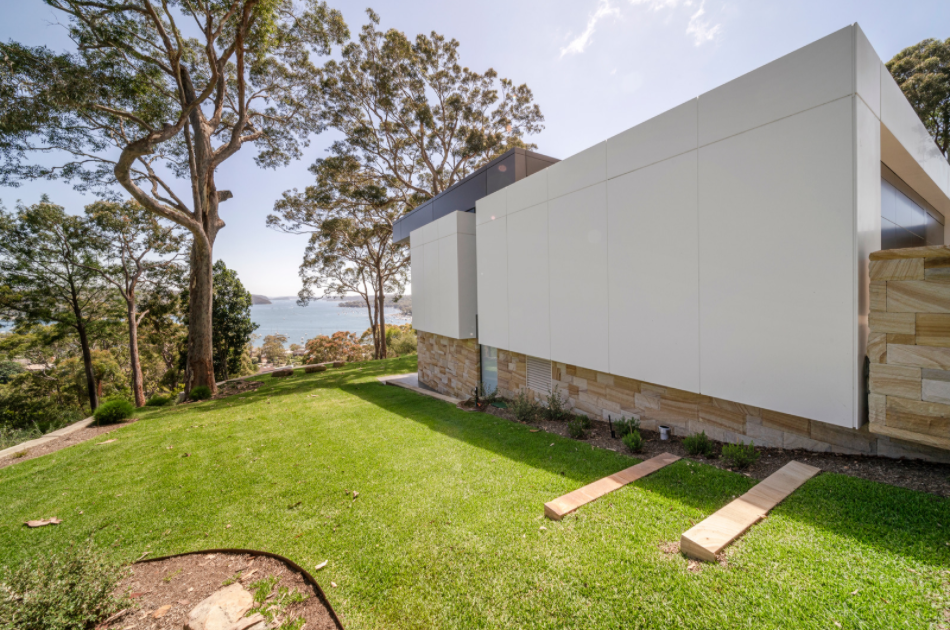 David had not considered using Corian® previously, but as he started to dive deeper into exploring this option, he found its suitability unfolded to present Corian as a perfect solution. While at first, David had had some reservations about using Corian® in this way, believing that there could be some expansion and contraction issues and potential UV degradation, he soon discovered that the expansion and contraction was minimal and Corian® has a particularly good level of UV resistance, not to mention an excellent track record with stain resistance. 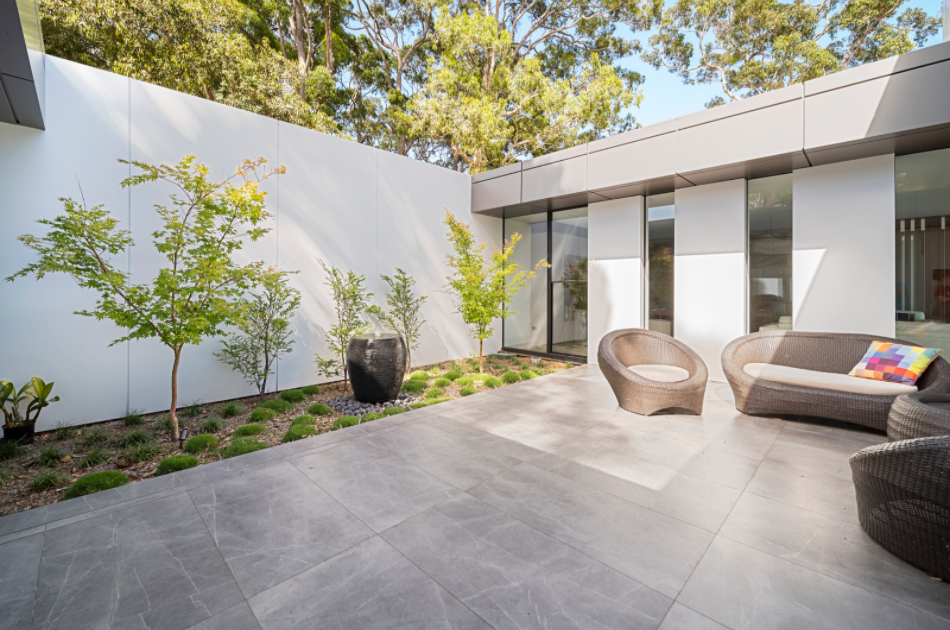 Corian® also offered some extra benefits other competitors didn’t. “Corian® by comparison to the alternatives offered all the qualities I had been searching for,” David says, “controlled panel precision, consistent colour and finish, stain resistance, and it offered a perceived softness through a translucent depth. The project was discussed at length with the technical team at CASF and the global Corian® team, which helped bring this project to fruition. 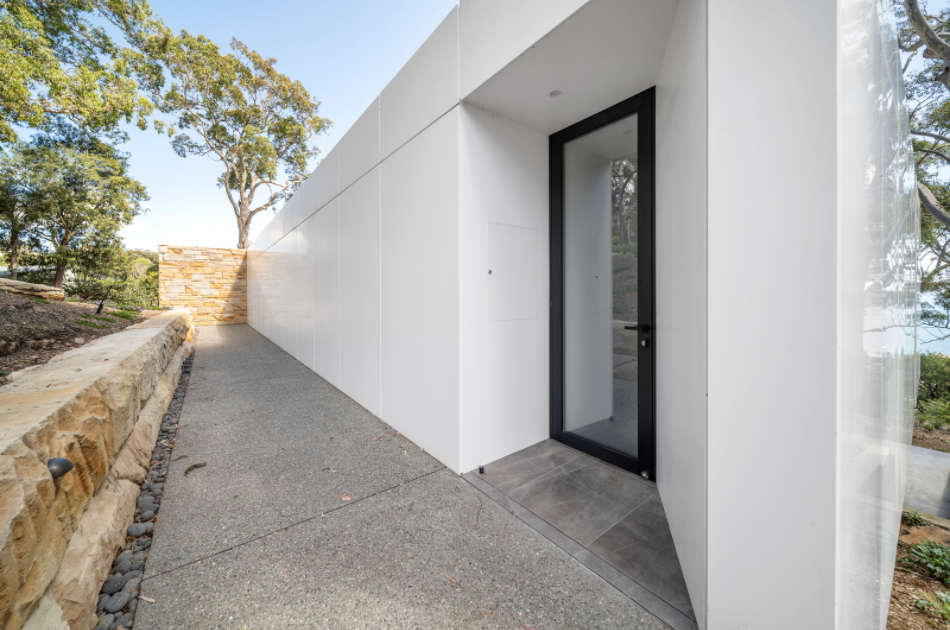 “SCF Interiors was engaged to supply, fabricate and install external Corian® wall cladding and the front door and bathroom vanities,” explains Matt Biviano of SCF Interiors. “This was the first time Corian® had been used for external wall cladding in a residential home in Australia, so it called for a brand new concealed fixing system consisting of aluminum framing, which was developed to fix the panels back to a dincel concrete wall structure. The fixing system also needed to facilitate the Corian® shadow line between each panel.” 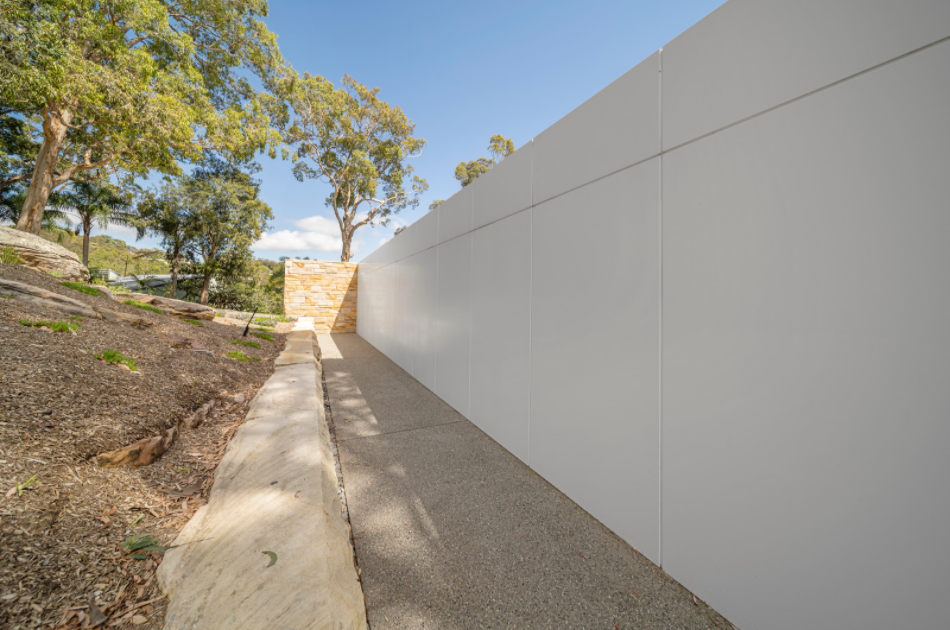 This was no mean feat with the oversized panelling of which the largest sits at 3000mm by 1450mm, but the result is spectacular and well worth the effort put in. The clients wanted a house that was unique and that would set it apart from the surrounding properties and anything else in the luxury home space and Corian® undoubtedly facilitates this being achieved. 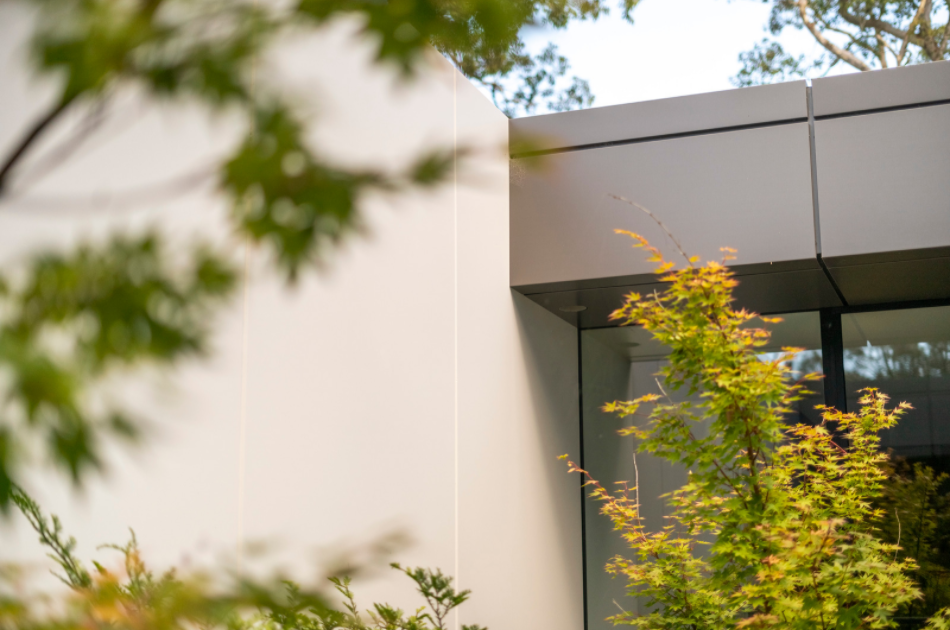 “The end result justifies the time spent in the development of the systems and ensures the future use of Corian® in unique exterior situations on residential and commercial projects,” adds David. “My life has been driven by a passion for design that has never diminished over time. Always living for the next challenge, always challenging the design solution, always questioning a better way, a better solution, new technologies and new materials.”

“This Bayview home was a project and challenge that I took on board with great enthusiasm and believed it was one that demanded the ultimate in design solutions and material selection,” he concludes.