Wynnstay House is the home to Architects Rob McBride and Debbie Ryan, and has painstakingly been built over a number of years, ensuring every detail is precise and in context with the rest of the home.

The Kitchen is the latest addition, and is a real ‘Wow’ for visitors. Corian® was selected for this project because it is malleable, robust and allowed the freedom to shape. Following the water theme of the interior, the island bench alludes to an iceberg.

Corian® perfectly integrated with the interior of the house. Corian® seamlessly lent practicality and longevity to a form that has poetic license.

“The kitchen joinery unit is essentially a carcass enveloped with formed Corian®.  We waited a long time for our bench because firstly Rob and I had to agree on what we wanted, and then we had to wait until we could afford it.  The kitchen bench is in an open plan living /dining area and it was important to us that it looked like `something’.

kitchen joinery unit are nearly always one of the most used areas of a house.  We wanted a kitchen that was permanent and could withstand the `rough and tumble’ of family life.  Corian® was the obvious choice.  We have used it on many projects and we know it performs extremely well.  Importantly we know that this product has extremely good back up service.

We wanted a kitchen joinery unit that was seamless and one singular form:  Corian® was the only material that we could think of that would achieve this.

We had already established a theme around the ancient elements – earth, water, wind and fire.  Water is represented and physical:  The kitchen is only separated by glass from the pool.  The ceiling is like when you throw a pebble into a pond with radiating ripples and our Glacier White Corian® bench is the `Iceberg’. 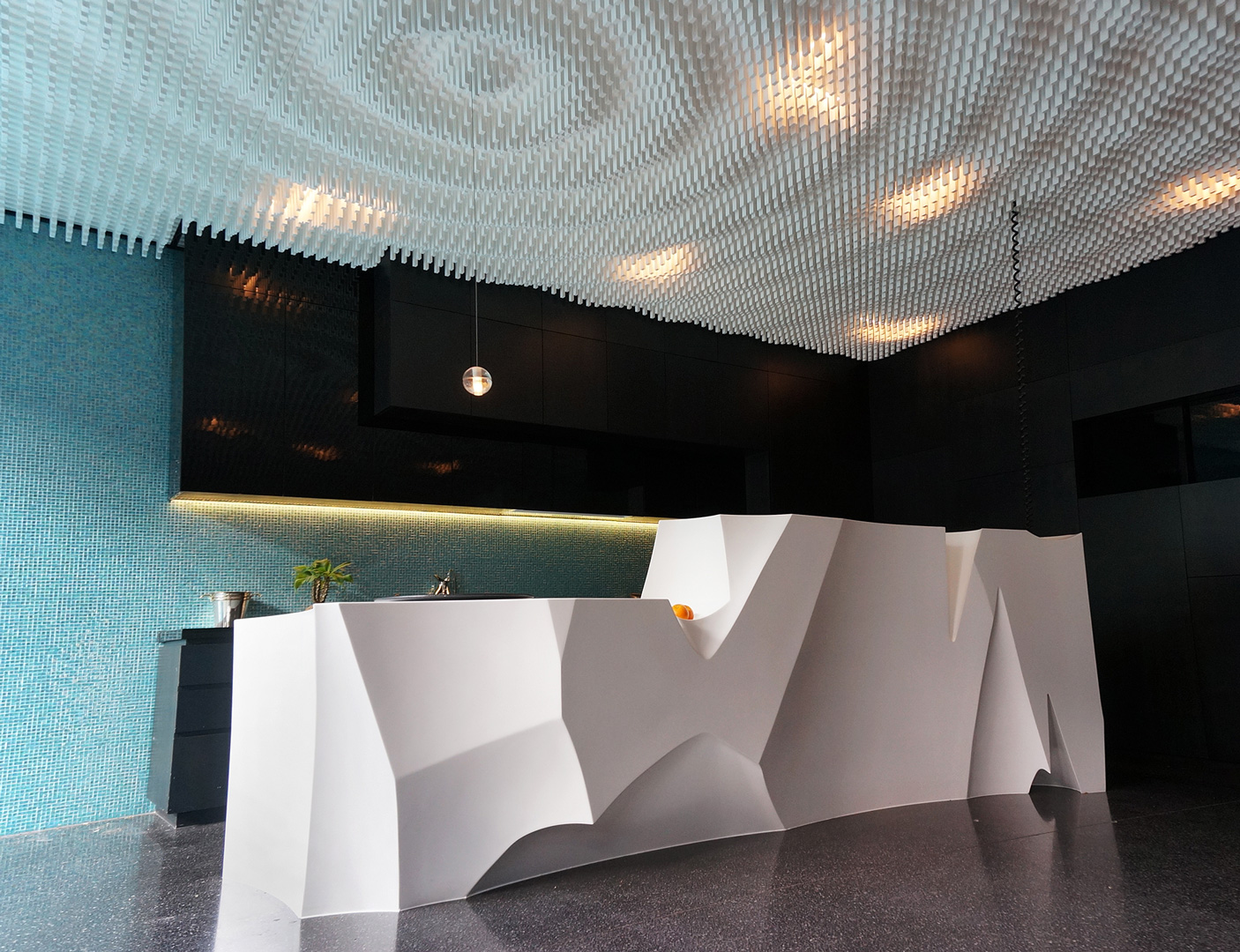 One of our greatest difficulties was finding a fabricator willing to take on this risky project:  We were very relieved when Clinton Buckwell from `Individual Design and Construction’ took on the challenge.  He was very enthusiastic about the project  and after one meeting told us he did not want to fabricate the bench the way we had drawn it.  Essentially we drew it in laser cut layered sections which were to be stacked glued and sanded.  He said it would look the same but he wanted to `thermo mould it’.  We agreed on the process and were very excited at our first visit to his workshop where we witnessed the very talented Michael well on the way to forming the bench.  A lot of the construction process was trial and error and best guesses about what would work. 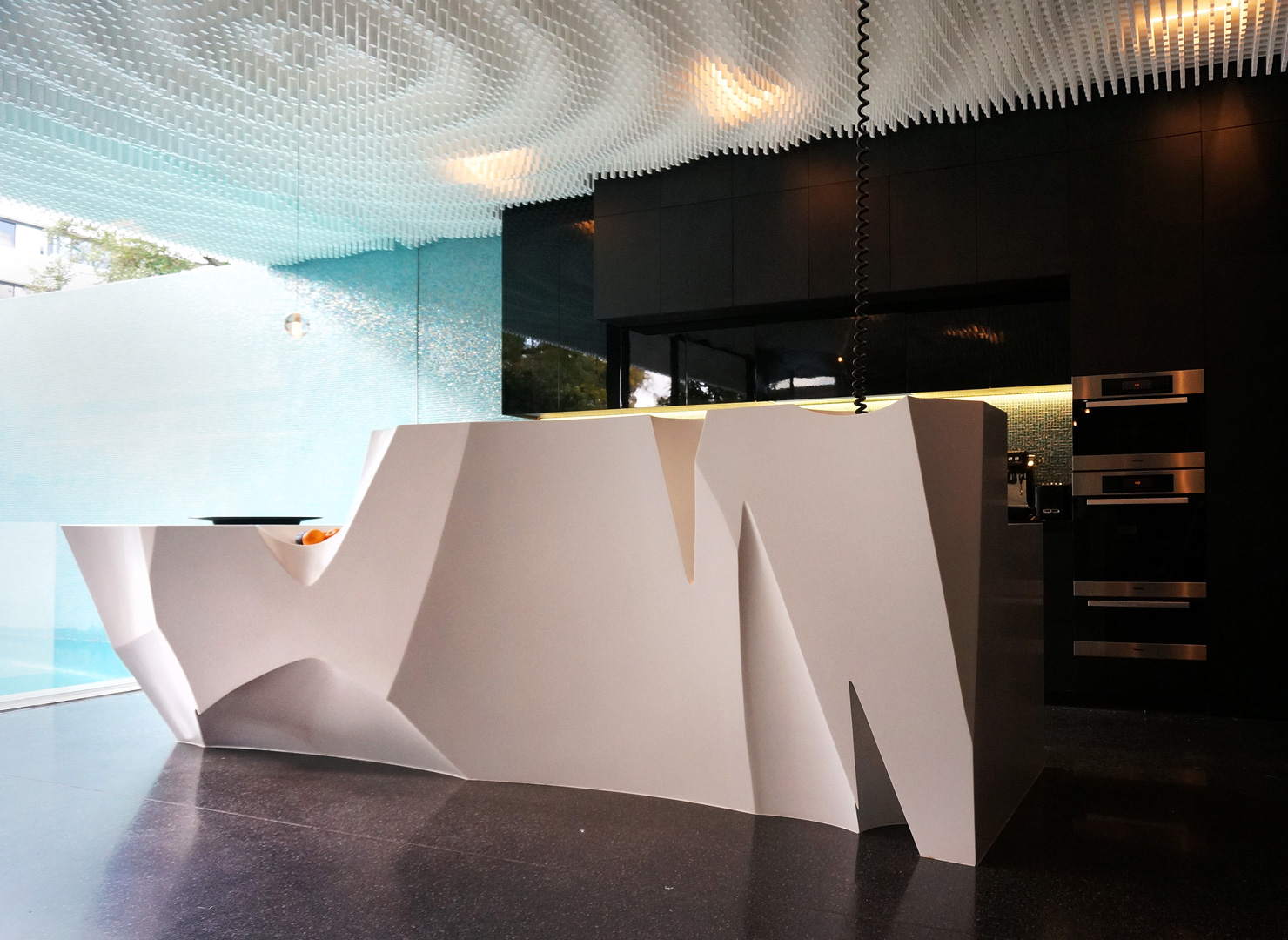 The other difficulty was getting the kitchen into the house in one piece.  It took seven `big blokes’ to move the unit into place with only one small crack on a seam in the move.  The beauty of Corian is that this could be easily fixed.

The MCR office had been working on a scheme for multi residential apartments where we were working with cones.  In a way this bench became like the prototype for the possibilities of an entire building. It has always interested us how projects can be applied at different scales.

We have always believed that aspiration is the essential ingredient to innovation.  You work out what you want and then you work out how you can achieve that.  It never ceases to amaze me – the creativity and inventiveness of human beings.  Clinton and Michael were a wonderful addition to our team in achieving this outcome.” – Debbie Ryan, McBride Charles Ryan