Mr. Yasushi Suzuki of ateliér unison said, “We started by fumbling for solutions. Using Corian® Solid Surface was the idea, but I wasn’t sure if it was possible.” A unique, cute restroom space design was included in the renovation plan for SHIKATSU KINDERGARTEN in Kitanagoya-shi, featuring colorful Corian® Solid Surface wrapped around the toilets. “This restroom is for pupils of junior class, and the kindergarten requested a design in which the children wouldn’t play with doors or get their hands shut in the doors. I suggested a spiral shape that provides privacy but has no doors,” he said. 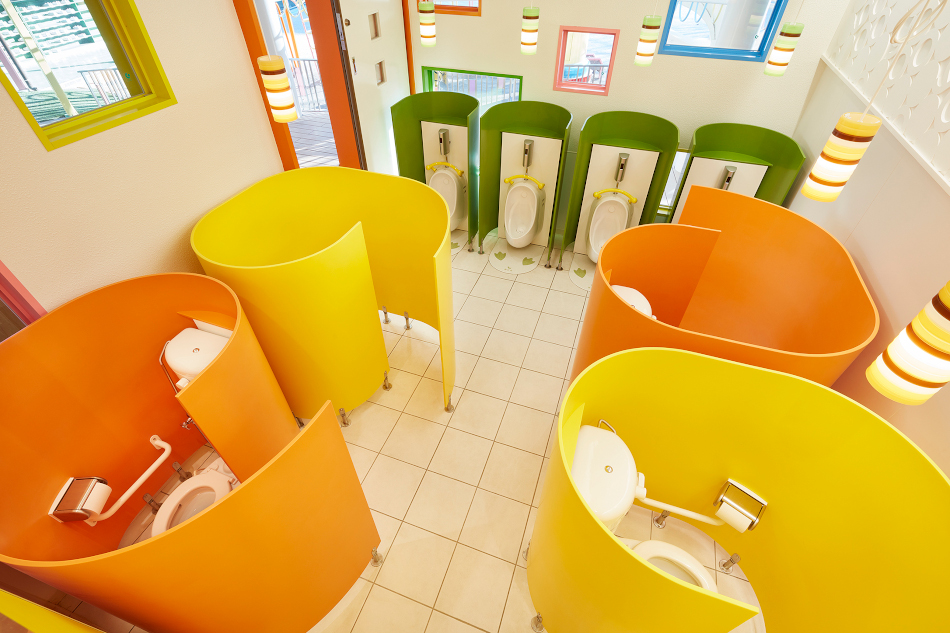 The pupils of junior class are in the midst of potty training, and this groundbreaking idea features door-less booths that are easy for children to enter so they can smoothly use the toilet without help from their teachers. The booth height is based on the children’s height so adults can see inside easily for a high level of safety. The design also has no corners so it is sanitary, with no places for dirt or germs to build up.

Ms. Mami Tanaka of ateliér unison said, “Corian® Solid Surface is often used in straight sheets, such as for countertops, so I didn’t think we could fabricate it to this degree. However, after looking at various construction examples, I realized it has the durability we needed and can be freely fabricated.”

They entrusted the production to Yamashita Planning Office, which produces made-to-order furniture. The components were produced at the factory in two parts, then seamlessly joined at the kindergarten. This utilized the unique qualities of Corian® Solid Surface, including bending and seamless adhesion. “The seams don’t stand out at all, and I was surprised by the beautiful curves,” she said. 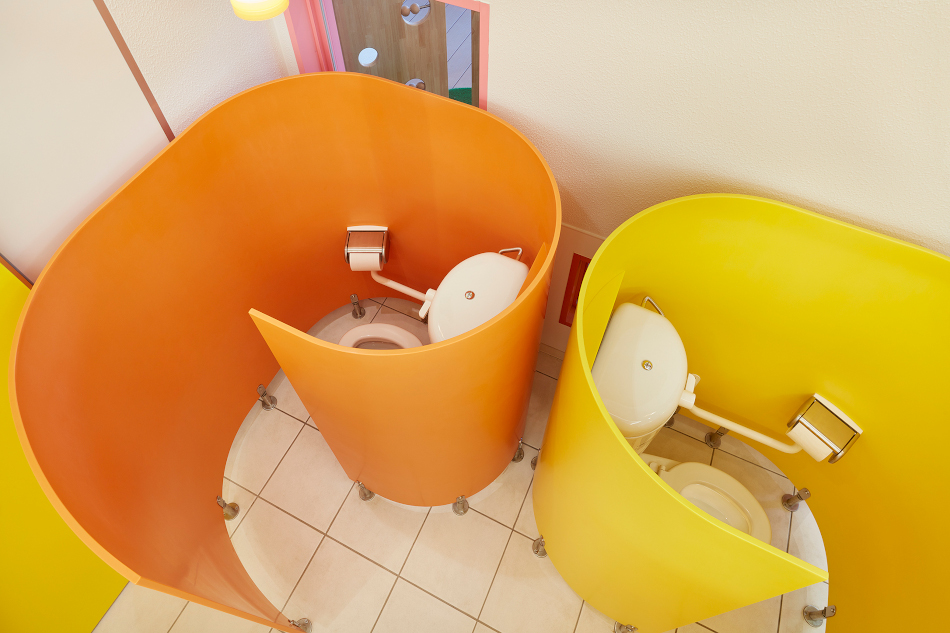 Shikatsu Kindergarten was opened in 1964, and the restroom before the renovation was 45 years old. It had a closed-off design and cold atmosphere that seemed dark and scary to children. Mr. Suzuki said, “During potty training in particular, many children don’t want to go to the bathroom. We worked to make this restroom bright, colorful, and cute—an exciting space that kids feel no reluctance to enter.” 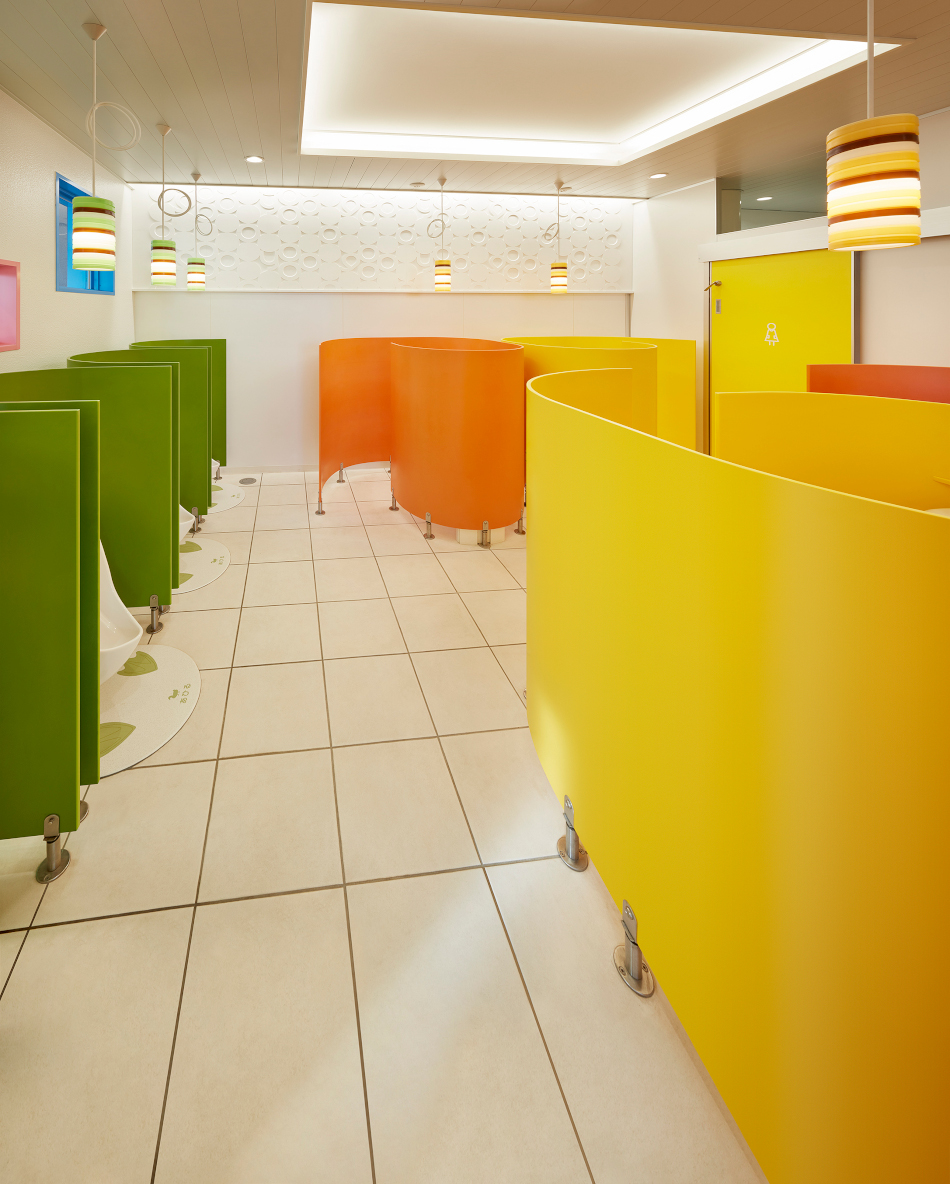 Because this was a renovation, the design had to match with the existing building. Three shades (yellow, orange, and green) were used as accent colors for the construction in areas other than the restroom, and the restroom was designed with the same hues. Corian® Solid Surface Citrus Orange and Imperial Yellow are used for the toilet booths, while Blooming Green was chosen for the urinal partitions. “Against the consistently white flooring, walls, and other parts, these vivid colors provide better visibility and encourage kids to use the bathroom,” said Mr. Suzuki. The children enjoy this colorful restroom, such as saying, “Today I’m using orange!” Corian® Solid Surface also resists dirt and is easy to care for, which the teachers greatly appreciate.

This restroom, which is functional while also encouraging children’s spiritual growth and sensitivity, won the Kids Design Award in FY2018. 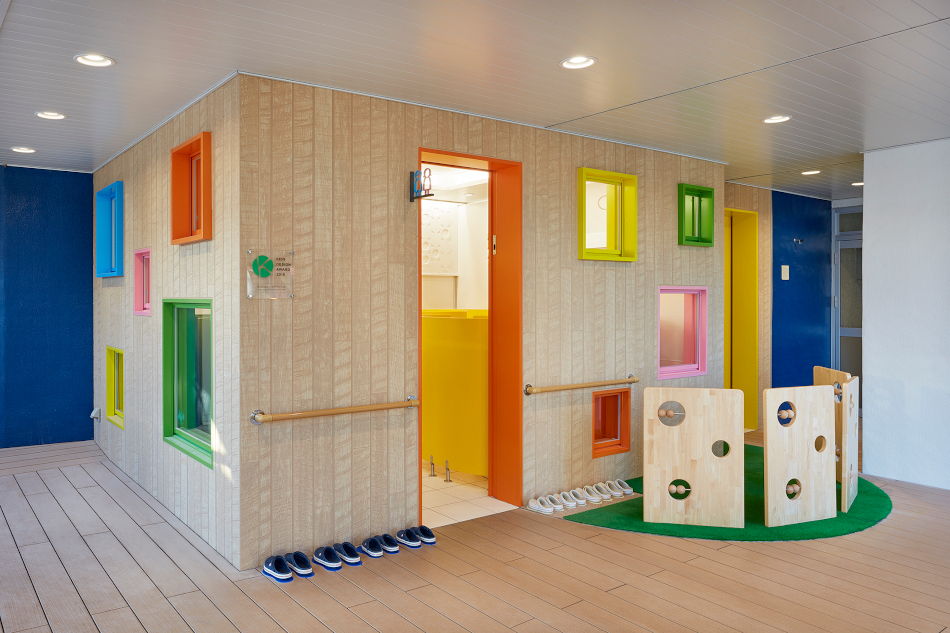