Architectural Design at the Seeko’o Hotel 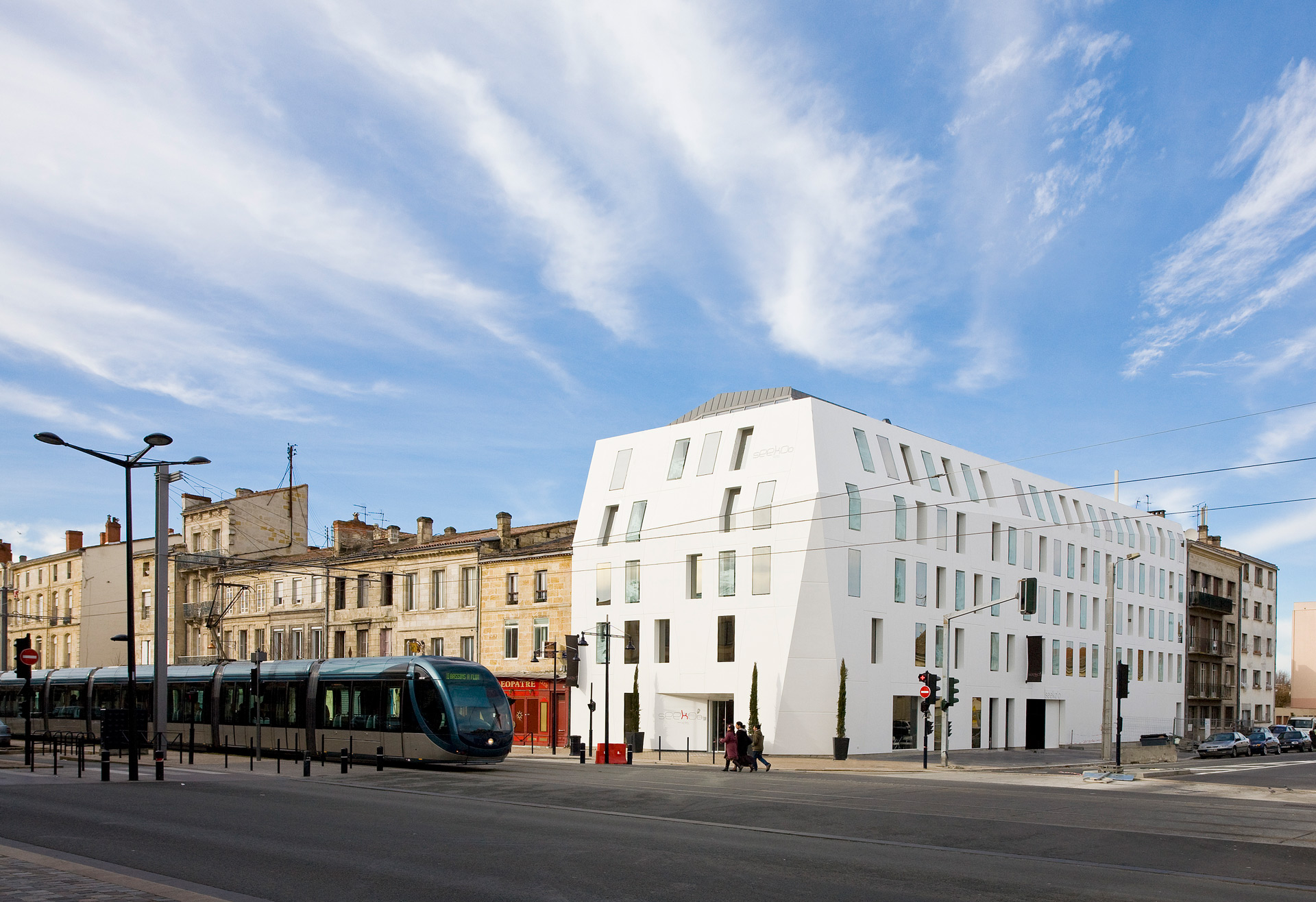 A façade made from DuPont™ Corian® solid surface for the Seeko’o Hotel in Bordeaux, France.

The sleek, icy white façade of the Seeko’o Hotel is making a statement in the dockland area of Bordeaux. Seeko’o means “iceberg” or “glacier” in Inuit, and from the start this was an unusual and adventurous concept. 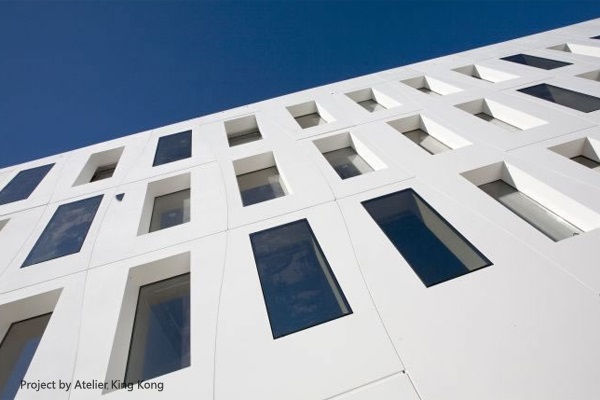 Creating a designer hotel in downtown Bordeaux, on the left bank of the Garonne, was always going to make waves – this is a strategic landmark of a town, well known for respecting its heritage and “stone city” spirit. Yet this was precisely the challenge: to build a project that would both break with tradition and yet harmonise with its environment.

In order to create the desired “iceberg” effect, architect Jean-Christophe Masnada, of the Atelier d’architecture King Kong, had the idea to develop a façade made from DuPont™ Corian® solid surface.  While both the aesthetic and performance qualities of the material made it a clear choice, an exterior cladding process such as this had never been done before. 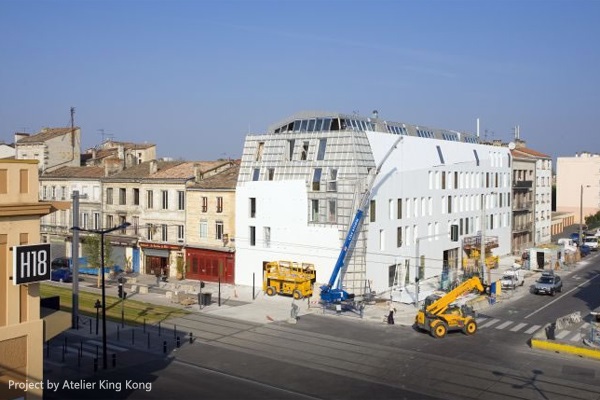 All tests and technical validations were undertaken by Qualiconsult, a French regulatory organisation, as part of an “Enquête Technique Nouvelle” (New technical Enquiry). This was performed in close cooperation with Anne-Line Citerne, project leader at DuPont, who explained: “The innovative fixing system that was developed for this project was validated as an R+4 level façade-cladding project in a Class II wind area during the investigation by Qualiconsult. This system uses Façalu aluminium frameworks from the Etanco company and incorporates invisible fixings that attach the panels of DuPont™ Corian® onto a clip system on the framework in secondary, horizontal profiles. The framework is about 10 cm thick and can also, if required, receive an exterior insulation material, as well as a rain-proof film, between each rail. This innovative system provides outstanding impact strength together with excellent resistance to positive and negative loads.”

The project builds on all of the inherent qualities of DuPont™ Corian® for outdoor applications: it is smooth, nonporous, resistant to weathering and graffiti, has good UV resistance and provides edges that have the same color as the faces and joints between each panel. The translucency of Corian® can also be exploited beautifully in exterior applications. 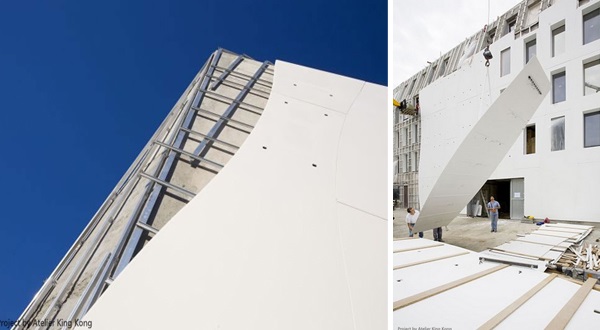 The concept of a façade made from Corian® solid surface came at an early stage to Jean-Christophe Masnada, who spoke enthusiastically about the project: “We were impressed by this noble and rich material from DuPont, which enabled us to withdraw from the traditional façade fitting systems. The façade panels are laid on a double metal framework in order to ensure a good evenness throughout: the tolerance between the panels is adjusted by one millimetre. We also had to deal with large yet thin panels, meaning these were both heavy and potentially fragile.” 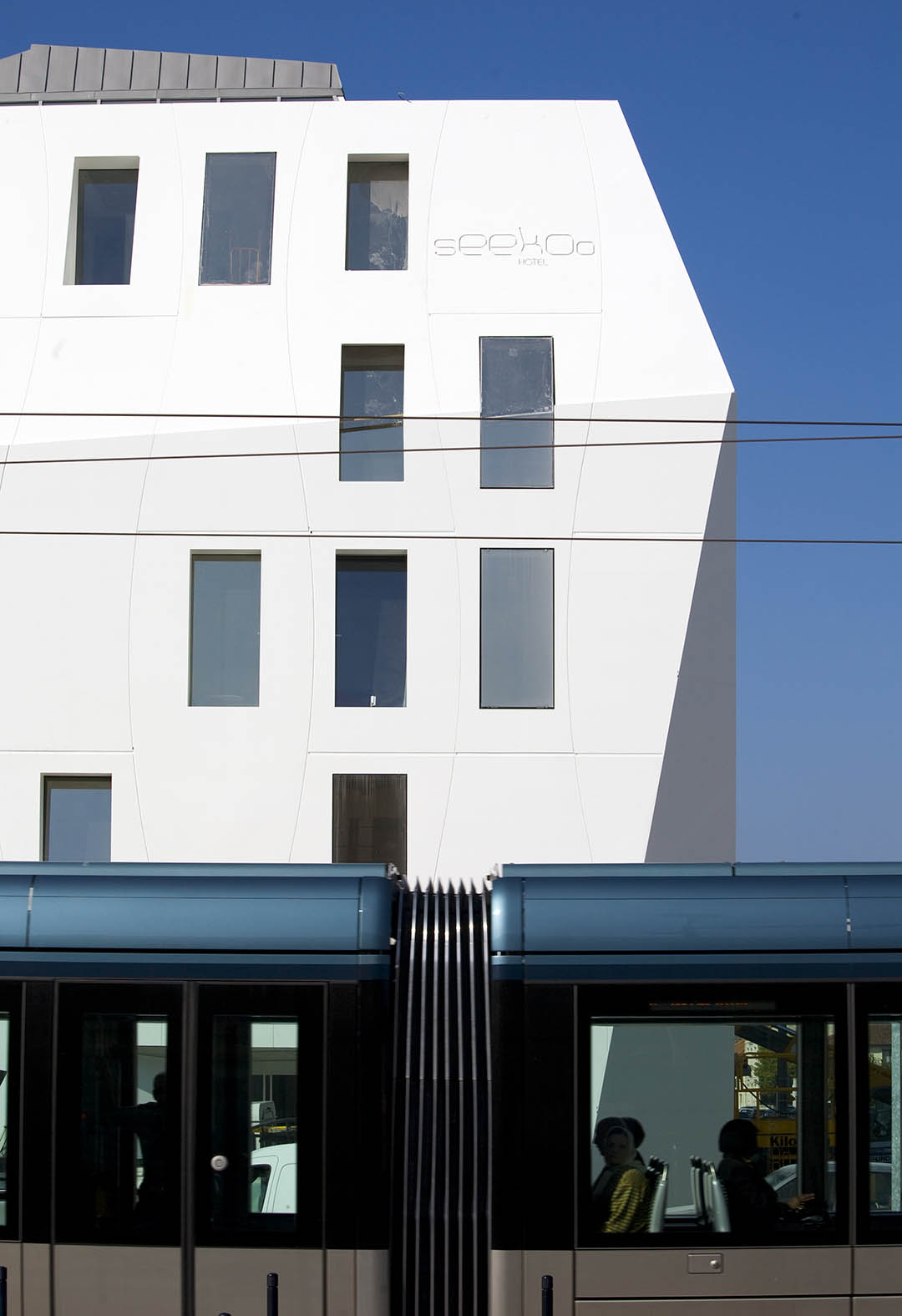 “DuPont™ Corian® offers the further advantage of easy maintenance and repairability on site. Even after its installation in the event of any damage: it can be renewed by a process of either sanding away superficial damage or cutting out and replacing the damaged sections and then repolishing. The façade fabricator and AEA, the fabricator of DuPont™ Corian®, worked very carefully, because of the high levels of precision required. The façade maker developed a very clever hoisting system, specifically for this project, because the panels would not have withstood ‘normal’ hoisting. Thanks to this system, they could slide the panels on rails, then raise them into a horizontal position and finally swivel them vertically to take their position on the façade,” said Masnada. 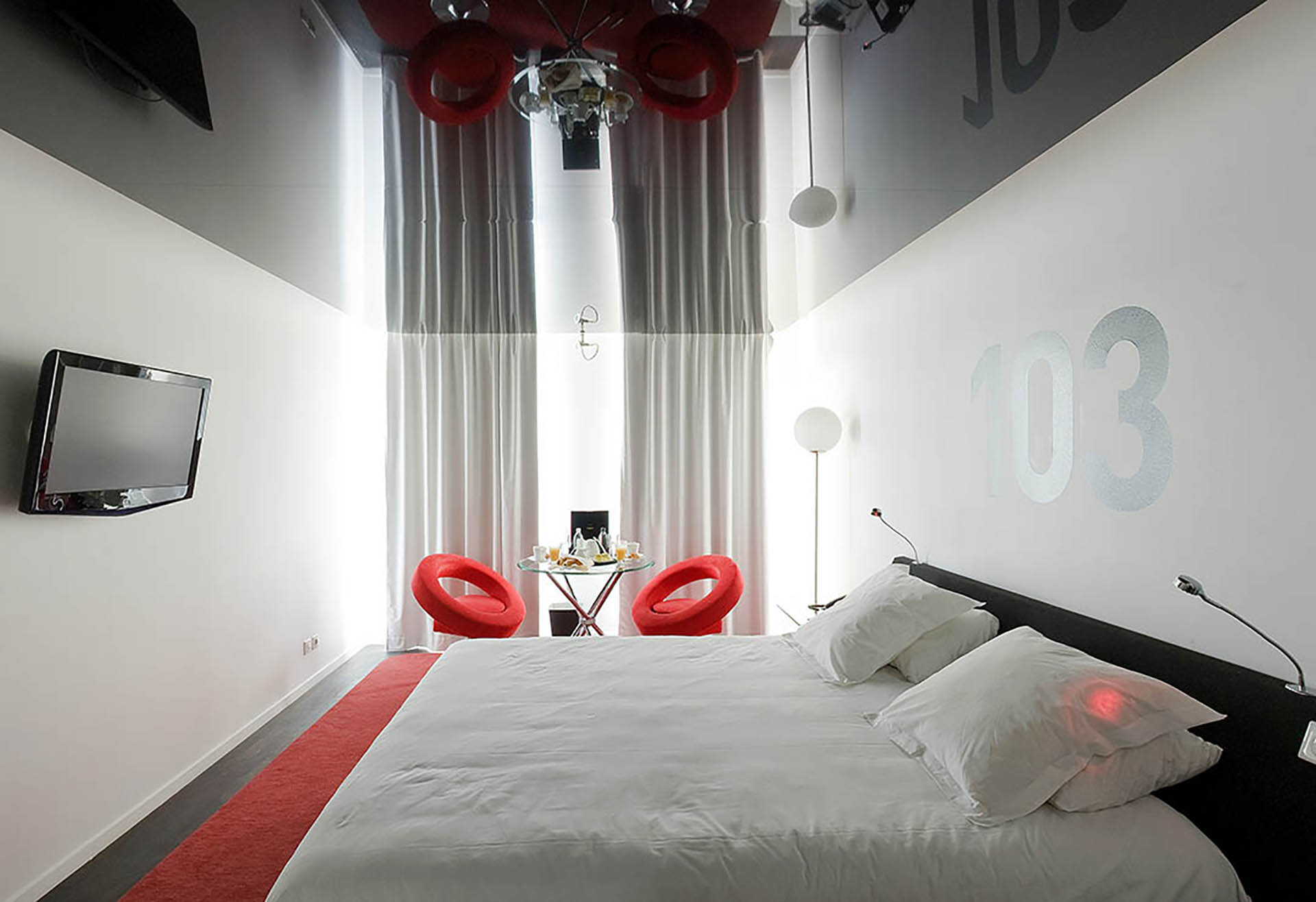 Cool, clean Corian® in Glacier White was the obvious choice to highlight the subtle sculptural look of the building, with its lines, planes and angles, its repeated openings, its interplay of shadow and light. Inside, the spacious bedrooms offer a view over the Garonne. 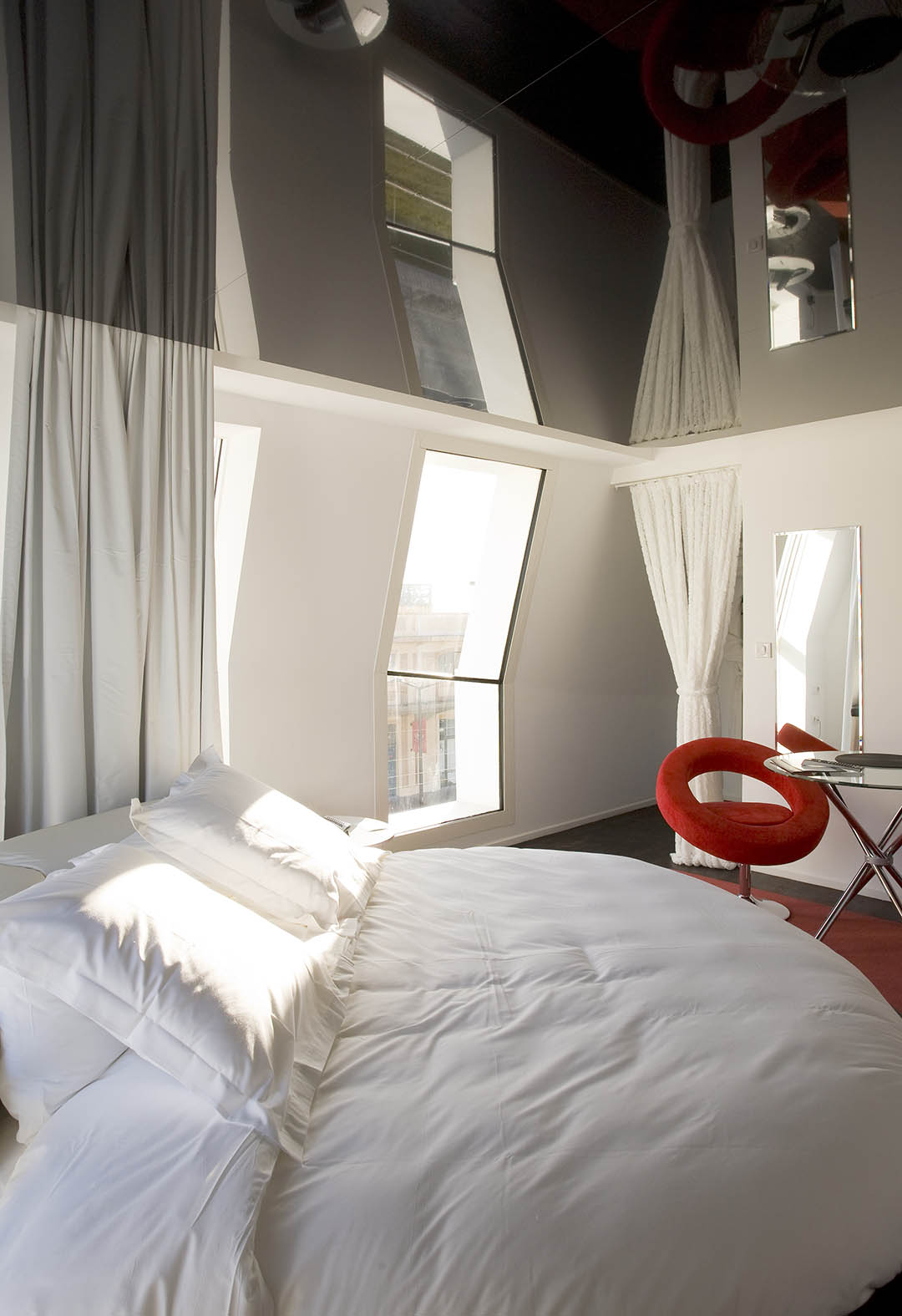 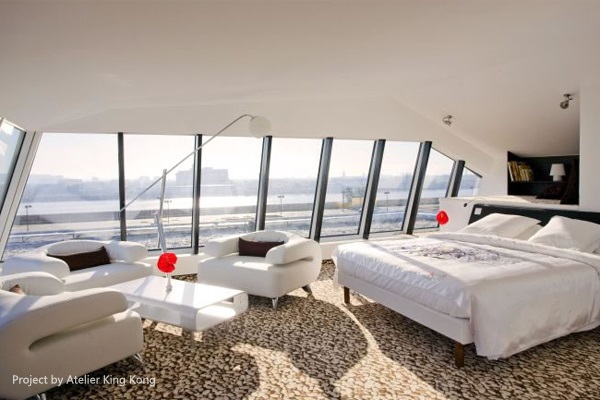 The interior space was “liberated” as much as possible. Even the bathrooms are inside the rooms, with a simple screen for privacy. Simplicity is the motto, from ceiling to carpet. 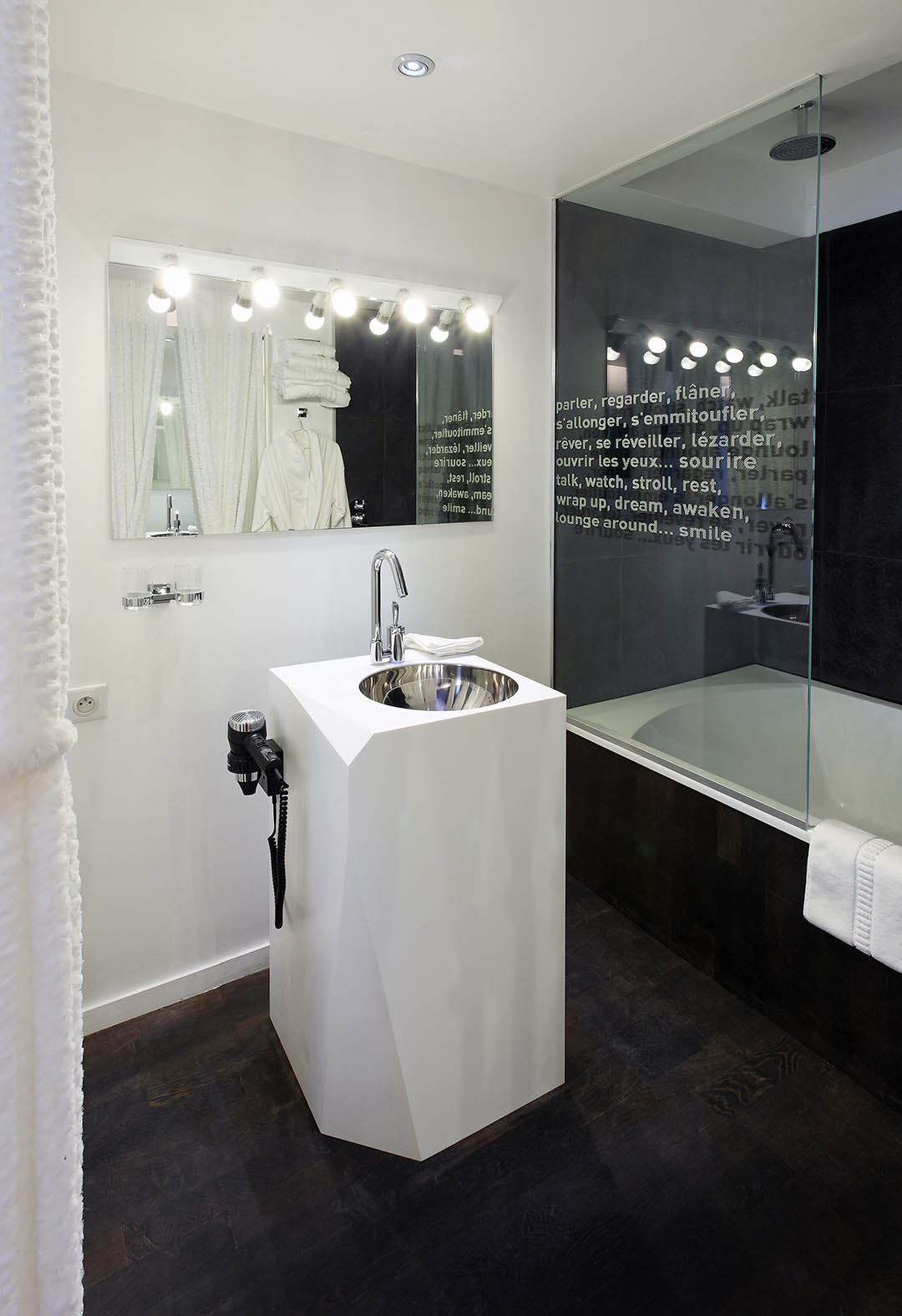 The design theme of DuPont™ Corian® is repeated and the material features once again on the interior as the bathrooms are fitted with basins made from Corian®, with a geometry that evokes the overall look of the building. 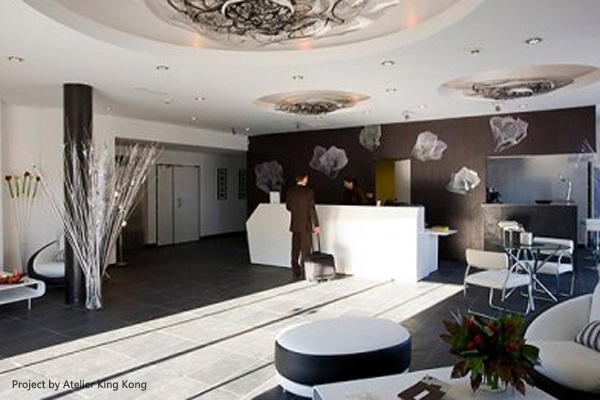 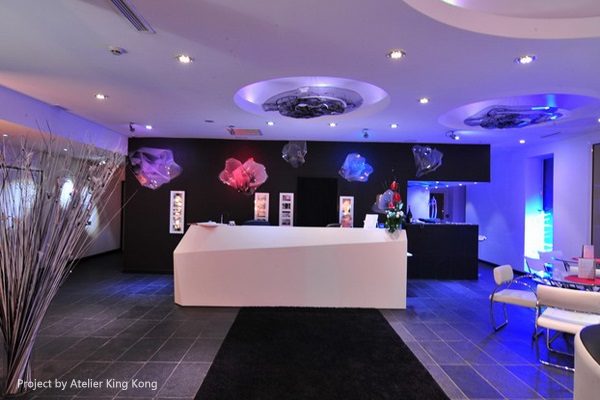 In the reception hall, a 4.5 metre long counter, also made from DuPont™ Corian® in Glacier White color, replicates the exterior façade.